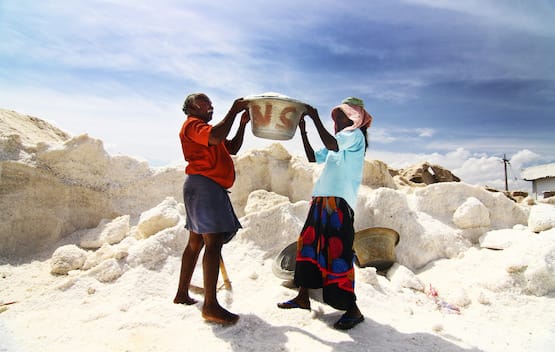 Global Alliance for Improved Nutrition's (GAIN's) mission is to increase the consumption of nutritious foods among vulnerable populations, especially women, girls, and children. They work to strengthen food systems — particularly salt iodization — by building partnerships between governments, the private sector, and communities to design and implement effective and sustainable nutrition programs. The specific program that The Life You Can Save recommends is GAIN's Salt Iodization program

Iodine is a micronutrient crucial for bone and brain development. However around 1.75 billion people — nearly a quarter of the world’s population — get too little iodine in their food. [1] [2] This leads to increased rates of miscarriage, stillbirth, and infant mortality, as well as cognitive and developmental problems, goiter, and hypothyroidism. Iodine deficiency is the leading preventable cause of intellectual and developmental disabilities in the world.

Huge progress has been made to address iodine deficiency through universal salt iodization (USI). The number of iodine deficient countries was reduced from 55 in 2003 to just 19 in 2017. [3] Yet despite many years of effort, about 25% of households in the developing world are still iodine deficient — many of them in areas that are the poorest and hardest to reach.

Nearly a quarter of the world’s population gets too little iodine in their food. It’s the leading preventable cause of developmental disabilities in the world. The solution: new models of universal salt iodization — or USI

We are in an unprecedented position: on the verge of being able to control iodine deficiency at a population level in a sustainable way. The good news is that fortifying salt with iodine is safe, relatively easy, has high returns on investment, and is extremely inexpensive. It is one of the most common forms of fortification, now practiced in more than 160 countries.

Adding potassium iodate to household salt during the production process gives people access to adequate iodine in their diet. (Salt fortification is credited with preventing 750 million cases of goiter over the past 25 years [4] and, according to Prof. Michael Zimmerman, Chair of Iodine Global Network, “89 studies worldwide have shown that salt iodization leads to an 87% decrease in cretinism and a 73% decrease in low IQ.”) While most large salt producers do this routinely, many small- and medium-sized producers in the developing world lack the means or knowledge to do so. Adapting USI models to include these smaller producers is needed to ensure full and sustained coverage. That’s where GAIN comes in.

GAIN has been a major force in global USI programs since 2008, when it was established in partnership with UNICEF and funded by the Bill and Melinda Gates Foundation. They support governments and salt producers in establishing and sustaining secure supplies of potassium iodate, improving iodization quality, effectively implementing salt quality laws, and putting monitoring systems in place.

GAIN can help build, expand, or sustain salt iodization programs depending on the country and the level of support it needs. It takes an investment of just US$0.15–$0.40 for GAIN to help provide one person access to adequately iodized salt through their lifetime. [5]

US$0.15–$0.40 can provide one person access to adequately iodized salt through their lifetime. In 2018, GAIN systematic review and meta-analysis of 50 studies which GAIN commissioned helped fill a critical knowledge gap about the full impact of salt iodization programs in low- and middle-income countries. It found that there was a 74% reduction in the odds of goitre and a significant reduction in iodine deficiency. [6]

What can you help GAIN achieve? Enter a donation amount below to find out.

What makes Global Alliance for Improved Nutrition so effective

GAIN works with a number of notable partners, including the Iodine Global Network [7], UNICEF, the Micronutrient Initiative, national and provincial governments, and dozens of salt industries.

Salt iodization programs in low- and middle-income countries reduce the odds of goitre by 74% as well as significantly reduce iodine deficiency.

GAIN is able to provide a person with access to adequately iodized salt throughout their lifetime with an average investment of only US$0.15–$0.40.

The Copenhagen Consensus estimates that for each US$1 donated to USI programs, productivity of its beneficiaries increases by US$30. Other studies show that a 1% decrease in malnutrition leads to a 4% reduction in poverty. [8] [9]

For less than US$1, you can provide someone adequately iodized salt for the rest of their life.

GAIN has made its Framework for Transparency available on its website, along with its annual reports and financial statements. It regularly publishes its data with the International Aid Transparency Initiative. [10] [11] [12] [13]

GAIN uses existing local infrastructure, working with governments, nonprofits, and businesses to implement low-cost and effective salt iodization programs. They make sure supplies of potassium iodate will be available long-term and provide their expertise to ensure the USI programs continue after their direct involvement in the region has ended.

In addition to being one of our recommended charities, the Stanford Social Innovation Review calls GAIN a notably successful global partnership. [14]

GAIN’s Executive Director Dr. Lawrence Haddad is a recipient of the 2018 World Food Prize, which recognizes that his work has “significantly improved nutrition for mothers and children in the critical first 1,000 days of life.” [15]

Who are GAIN's partners?

GAIN’s USI program was established in 2008 with a grant from the Bill and Melinda Gates Foundation. Since then, GAIN has received funding for some of its USI work from bilateral aid organizations, such as IrishAid and USAID, and foundations including Waterloo. In addition to UNICEF, GAIN works with the Iodine Global Network, the Micronutrient Initiative, national and provincial governments, salt industries, academia, and civil society on advancing salt iodization.

Yes. GAIN estimates it has played a vital role in the expansion of USI coverage for approximately 460 million individuals at an average of US$0.27 per person, making this one of the most cost-effective poverty interventions there is.

Iodization efforts are also economically beneficial to countries and local communities. A prime example is Switzerland, which eliminated iodine deficiency and its effects via universal salt iodization during the last century. The program cost €700,000 and led to an estimated savings of €500 million. [16]

GAIN’s primary grant for universal salt iodization ended in 2015, so your donation is helping GAIN deepen its work to reach those who are still unable to access a sustainable supply of iodine in their diet.

What are some examples of what GAIN has achieved?

And in India, GAIN helped develop and implement a web-based information management system to improve government monitoring of salt supply.

Why does The Life You Can Save recommend GAIN's salt iodization program?

We recommend GAIN’s iodization program because it was recognized as a GiveWell standout charity before GiveWell retired that designation.

All photos and videos courtesy of Global Alliance for Improved Nutrition