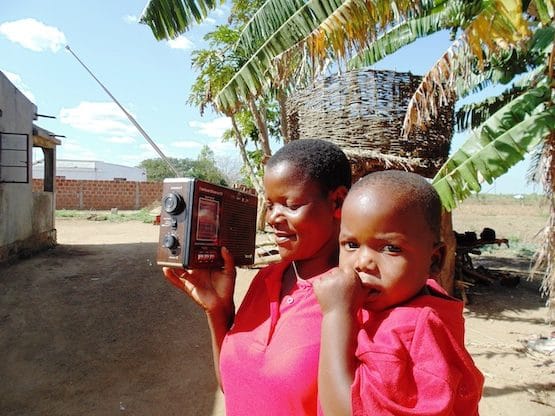 The problem: lack of access to health and wellness information

Worldwide, 5.3 million children under the age of five die each year. [1] Over half of these deaths could be prevented, and maternal mortality slashed, if families were to make use of simple, inexpensive, or free interventions such as handwashing, giving birth in health facilities, breastfeeding, and making use of readily-available treatments for malaria, pneumonia, and diarrhea.

Worldwide, 5.3 million children under the age of five die each year. Over half of these deaths could be prevented with simple interventions. Media health campaigns facilitate information exchange and shifts in cultural norms. Radio, television, and mobile videos can be used to reach millions of people in low-income countries, raising awareness, for example, about how to identify and protect against potentially dangerous illnesses, and what to do if they occur. At the same time, broadcasts can help break down cultural barriers that prevent people from adopting healthy behaviors, persuading vulnerable populations, for instance, to make use of health workers and available resources.

Most poverty aid programs focus on the “supply side” of interventions — for example, training doctors and nurses, supplying equipment and medications, and building healthcare facilities. In contrast, DMI works on the critical but much-neglected “demand side.”

Many of DMI’s campaigns are broadcast on radio in the form of minute-long spots in local languages, written by DMI’s creative teams in Africa with oversight from creative experts in the UK. They run 10 times per day over several months or years. Some campaigns also involve interactive radio programs, which encourage audiences to phone-in and participate in the radio shows.

TV spots, usually one minute in length and featuring local actors, are broadcast at peak times on popular channels to engage large audiences, ideally at a minimum of three times per day. Mobile video campaigns can be shared via peer-to-peer networks through SD cards or Bluetooth, or on social media, depending on the target demographic.

Accept and watch video Learn more about cookies >
A spot from a TV campaign in Tanzania.

DMI researches local beliefs, attitudes, behaviors, languages, and barriers to behavior change in order to create customized media spots that encourage communities to make use of the health care services already available to them, as well as promote positive behaviours that do not rely on services.

Delivered at scale, DMI’s campaigns are estimated to cost only US$7-27 per disability-adjusted life year (DALY), or US$196-756 per life saved. After DMI conducted a major five-year campaign in Burkina Faso, they evaluated its success with the largest-ever randomized controlled trial to measure the impact of media on health behaviors. Results showed that child mortality was reduced by 9.7%, with approximately 3,000 lives saved — suggesting that this approach is among the most cost-effective methods of saving children’s lives. [2]

DMI’s campaigns are estimated to cost US$196-756 per life saved. This approach is one of the most cost-effective methods of saving lives.

DMI’s Burkina Faso campaign was the first time mass media had been scientifically proven to change behaviors in a low-income country. DMI has since completed a second randomized control trial on a family planning campaign in Burkina Faso. The results will be published later this year. [3]

What can you help Development Media International achieve? Enter a donation amount below to find out.

Radio is extremely popular in sub-Saharan Africa, giving media campaigns a huge reach. For example, 59% of women and 70% of men in Uganda tune in at least once a week. [4]

Delivered at scale, DMI’s campaigns are estimated to cost only US$7-27 per DALY, or US$196-756 per life saved, making it one of the most cost-effective health interventions available. These figures have been peer reviewed and published in BMJ Global Health.

DMI has conducted two large-scale randomized control trials (RCT) that have provided gold-standard evidence for their campaigns’ effectiveness. Where RCTs are not possible, DMI uses quasi-experimental designs to evaluate its work.

DMI can educate communities about multiple health issues in a single campaign for little extra cost. DMI has also invested in solar panels for radio stations to avoid program interruptions due to power outages and to strengthen relationships with radio stations.

It costs only $600 to save someone's life through a DMI campaign.

DMI is recognized as a standout giving opportunity by charity evaluators Giving What We Can and ImpactMatters. [5] [6] [7] [*]  ImpactMatters [*] awarded them the highest ratings across-the-board in Impact and Cost, Quality of Evidence, Quality of Monitoring Systems, and Learning and Iteration.

DMI partners with leading international health bodies such as the World Health Organization; Every Woman Every Child; and The Partnership for Maternal, Newborn and Child Health. DMI also collaborates with prestigious universities including London School of Hygiene & Tropical Medicine, University College London, and the Massachusetts Institute of Technology.

Many of DMI’s campaigns are broadcast on radio in the form of minute-long spots in local languages (hear an example on Youtube). Some campaigns also involve interactive radio programs, which encourage audiences to phone-in and participate in the radio shows. TV spots, usually one minute in length, are broadcast at peak times on popular channels. Mobile video campaigns can be shared via peer-to-peer networks through SD cards or Bluetooth, or on social media, depending on the target demographic. [8]

What other campaigns has DMI run?

Previous successful campaigns that have been managed by DMI or DMI staff have targeted:

Do people still use radios very much? Do enough people own televisions?

In most countries in sub-Saharan Africa, radio is still by far the most popular form of media. However, TV viewership and mobile phone usership are on the rise, so DMI is increasingly conducting campaigns using these channels to reach certain populations.

Why does The Life You Can Save recommend Development Media International?

​We recommend DMI because of their across-the-board in Impact and Cost, Quality of Evidence, Quality of Monitoring Systems, and Learning and Iteration. They were recognized as a GiveWell standout charity before GiveWell retired that designation.

All photos and videos courtesy of Development Media International

[5] Giving What We Can, Charity Update 1: Development Media International