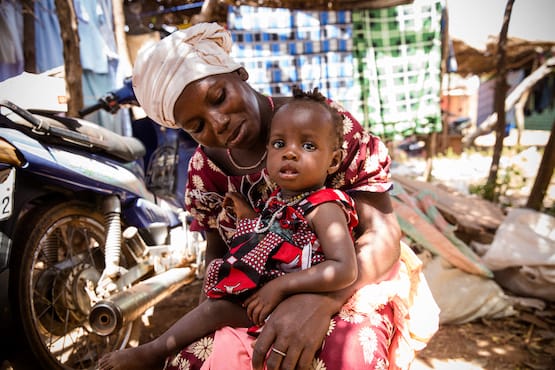 Malaria Consortium delivers programs that protect the poorest and most marginalized children in Africa and Asia from a range of deadly diseases, including malaria and pneumonia. We recommend their Seasonal Malaria Chemoprevention (SMC) project in particular. SMC is an extremely cost-effective and evidence-based way of protecting children under 5 from malaria.

Malaria, though almost nonexistent in affluent countries, is pervasive in low income countries in tropical and subtropical regions. It takes an enormous toll on individuals, families, and national economies. When a family member contracts malaria, it not only threatens that person’s health, but their family — usually already poverty stricken — can fall further into destitution. This is due to a range of factors, such as navigating the logistics and expense of seeking treatment, losing education or wages from missing school or work, and burial expenses for deaths.

Such direct costs have been estimated to be over US$12 billion per year worldwide. [1] Communities and nations sustain even greater costs from lost productivity and the drain on medical systems.

A child dies from malaria every two minutes. It’s no wonder that the Centers for Disease Control and Prevention characterizes malaria as “one of the most severe public health problems worldwide.” [2] The World Health Organization (WHO) estimates that there were 219 million cases of malaria and more than 435,000 deaths globally in 2017, with over 90% of those in Africa. Pregnant women and children under the age of 5 are especially vulnerable: a child dies from malaria every two minutes. [3]

Since 2012, the WHO has recommended SMC for children ages 3 months to 5 years living in areas of high seasonal malaria transmission in the Sahel subregion of Africa: it has been proven to reduce approximately 75% of all malaria episodes and 75% of severe malaria cases. When children do not contract malaria, their own health is protected and the transmission pool is reduced, which helps the whole community. [4]

SMC consists of four monthly prophylactic treatments of amodiaquine (AQ) plus sulfadoxine-pyrimethamine (SP) during the period of greatest risk, which typically coincides with a region’s rainy season. The tablets easily dissolve with water. Both SP and AQ are given to the child by a trained community distributor. The child’s caregiver is then instructed to give the child two remaining doses of AQ daily in the following two days.

SMC has been proven to reduce approximately 75% of all malaria cases. Malaria Consortium is a global leader in SMC. They support a wide range of elements required for a successful SMC program, including:

Malaria Consortium collaborates with communities, governments, academic institutions, and local and international organizations to build localized expertise and sustainability: 95% of staff work in malaria-endemic areas. Their health workers and community distributors deliver SMC treatments, primarily door-to-door. This approach that has been shown to achieve optimal coverage.

From 2015–2017, Malaria Consortium was the primary recipient and implementer of Unitaid’s US$68 million ACCESS-SMC project. Unitaid notes that the ACCESS-SMC project supported National Malaria Control and Elimination Programs in seven countries, “fulfilling more than 25% of the region’s need, while monitoring the safety, efficacy, cost, and public health impact of seasonal malaria chemoprevention at scale.” [5]

What can you help Malaria Consortium achieve? Enter a donation amount below to find out.

What makes Malaria Consortium so effective

Malaria Consortium identifies bottlenecks to improve the efficiency and quality of SMC delivery.

It’s estimated that, through its three-year partnership with the ACCESS-SMC project, Malaria Consortium may have prevented 10 million cases of malaria and 60,000 deaths. [8]

For less than US$5, you can protect a child from malaria for the entire rainy season.

Malaria Consortium’s SMC programs are focused on delivering quality-assured treatment regimens that have been independently studied in rigorous trials. To ensure local insights, effectiveness, and sustainability, Malaria Consortium’s staff are almost entirely located in the malaria-endemic areas where they work.

As an example of SMC’s sustainability, countries involved with ACCESS-SMC have successfully transitioned to other sources of funding, and more countries have started SMC programs. Nigeria, where an estimated 10 to 12 million children could benefit from SMC, has seen a substantial increase in funding from other donors such as the Global Fund to Fight AIDS, Tuberculosis and Malaria, USAID’s President’s Malaria Initiative and UK Aid.

GiveWell has named Malaria Consortium’s SMC program a Top Charity since November 2016 and their number one Top Charity in 2018, noting that it “offers donors an outstanding opportunity to accomplish good with their donations.” In November 2018, Good Ventures approved a grant of US$26.6 million to Malaria Consortium on GiveWell’s recommendation. [9]

Malaria Consortium’s efficacy and transparency have earned them support from multiple important partners. In addition to its leading role in Unitaid’s three-year ACCESS-SMC project, Malaria Consortium has worked with the Bill & Melinda Gates Foundation and the DFID-funded Support for the National Malaria Programme to pilot the feasibility of implementing SMC at scale in Nigeria.

How does the SMC process work?

SMC provides protection for up to one month after each complete three-day treatment. SMC community distributors administer the first dose of SP and AQ, and advise each child’s caregivers on how to prepare and administer the remaining two daily doses of AQ over the following two days. This is repeated each month for four consecutive months during the peak of malaria transmission season (broadly coinciding with a four-month rainy season).

In which countries does Malaria Consortium do its SMC work?

What if a child is already ill from malaria?

SMC community distributors are trained to recognize symptoms of malaria and refer sick children to local health facilities where they can be tested for malaria and treated if they test positive. The medicines used to treat are different than those used for SMC.

Donations support Malaria Consortium in providing a range of elements required for a successful SMC program. Those include:

What is Malaria Consortium’s capacity for growth?

According to the ACCESS-SMC project’s research findings, SMC could save tens of thousands of lives per year — but lack of program funding and limited production capacity for medicines leave nearly half of all children in need in the Sahel region of Africa without access. [10] GiveWell estimates that Malaria Consortium could absorb US$66 million for work in 2019-2020. [11]

Why does The Life You Can Save recommend Malaria Consortium?

We recommend Malaria Consortium’s Seasonal Malaria Chemoprevention Program because it has been named a Top Charity by GiveWell since 2016. GiveWell is one of our charity evaluators.