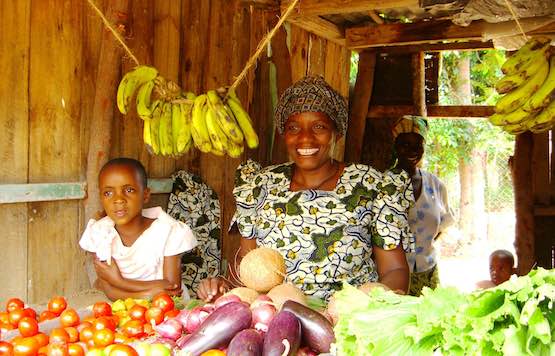 Village Enterprise equips the extreme poor in Africa with resources to start sustainable businesses through a four-part program: entrepreneurship training, a cash grant, business mentoring, and a savings group. There is strong evidence that this leads to a significant and persistent increase in income.

Many of the world’s very poorest people are caught in a cycle of poverty. They face multiple barriers to improving their standard of living, including a lack of access to capital for productive investments, poor information about managing assets, and the inability to make risky but potentially productive investments due absence of a safety net or savings buffer.

Village Enterprise addresses the fact that poverty is multifaceted by providing a multifaceted program to support new entrepreneurs. They employ a group-based approach that brings together diverse skill sets, spreads risk, builds social capital, and produces cost efficiencies. Because entrepreneurship can be risky and take time to pay off, the program offers grants, not loans, to allow vulnerable people to immediately improve their standard of living. Village Enterprise uses a one-year Graduation program to help people escape the poverty trap. The program provides business training and a US$180 grant to groups of three entrepreneurs to start a business. Village Enterprise targets individuals who have no prior business experience, live on less than US$1.90 a day, and are unable to provide for their family’s basic needs. Each business is assigned a local mentor and is organized into a Business Savings Group of 30 entrepreneurs to provide access to savings.

Multiple studies show that cash grants combined with business training lead to significant increases in household income, and that these benefits persist over a number of years. Multiple studies show that cash grants combined with business training lead to significant increases in household income, and that these benefits persist over a number of years. [1] Researchers, including Innovations for Poverty Action (IPA), have conducted a randomized controlled trial studying the efficacy of Village Enterprise’s work. The study found that the microenterprise graduation program leads to increased consumption, assets, and income, as well as improvements in nutrition and subjective well-being. [2] [3]

In late 2017, Village Enterprise launched the first ever development impact bond (DIB) for poverty alleviation in Africa. The US $5.32M DIB will transform the lives of 12,000+ households in rural Kenya and Uganda by creating 4,000+ sustainable microenterprises in under four year. It will also demonstrate how to ensure impact at scale as similar Graduation models are being replicated in other countries. [4]

What can you help Village Enterprise achieve? Enter a donation amount below to find out.

What makes Village Enterprise so effective

Village Enterprise’s cost per business is $800 and improves the standard of living for approximately 20 individuals — meaning their program transforms lives for an impressive $40 per person.

Strong, adaptive management systems track key metrics to help inform management decisions and what areas of the program to test.

Nine randomized controlled trials on similar programs support the effectiveness of cash grants combined with business training. ImpactMatters estimates a return of US$1.60 of lifetime household income for every US$1 spent. [6] [*]

Since 2017, Village Enterprise has iterated its program six times based on evidence from pilot testing, such as changes to its training procedures. Additionally, ideas submitted by staff are researched and tested annually,  with the most successful integrated into the existing program.

A US$800 donation can dramatically improve the standard of living for 20 people.

Village Enterprise has been thoroughly assessed and evaluated by ImpactMatters, and was among the first non-profits to have an Impact Audit carried out on its programs. This audit concluded that there is strong evidence that Village Enterprise is reaching its target population, has outstanding monitoring systems, and has a strong record of iterating its program based on high-quality data. [7] [*]

Village Enterprise was named one of the 2019 Drucker Top 10 Finalists, which recognizes nonprofit organizations engaging in outstanding innovation. Founders Pledge, a charity through which company founders and investors commit to donating a percentage of their personal proceeds to charity, has also endorsed Village Enterprise as a top charity for women’s empowerment.

Village Enterprise was chosen for the first-ever DIB for poverty alleviation in sub-Saharan Africa by a consortium of highly respected funders and international development experts, including USAID Development Innovation Ventures (DIV) and UKAID (DFID).

Why does Village Enterprise provide grants instead of loans?

Microloans often require payments very soon after a loan is made, and therefore do not give recipients much time to ensure their new enterprise is a success. Further, loans can prevent people from making risky investments with a potentially high return because of the required repayments and risks of default. A small seed grant can also allow profits to be used to address critical family needs rather than to make repayments.

What types of businesses do Village Enterprise business groups establish?

The most common businesses are livestock, agriculture, and retail.

What do participants usually spend their cash grant on?

Participants spend the cash on inputs needed for their businesses. For example, if entrepreneurs are starting a livestock business, they spend the cash on buying chickens, ducks, or goats; feed; material necessary for shelter; and vaccinations. For an agribusiness, the cash grant might be spent on seeds, fertilizer, and potentially renting a plot of land. Retail-service entrepreneurs spend their cash grant on goods and transportation.

Livestock and agricultural investments can be subject to shocks to weather or market prices. To help alleviate these risks, Village Enterprise has introduced the Smarter Market Analysis Risk Tool (SMART), a mobile technology tool that provides farmers with up-to-date market information to allow them to make informed business decisions. [9]

How will Village Enterprise use my donation?

Village Enterprise is investing new donations into strengthening the foundations for rapid scaling and implementing its five-year strategic plan. They follow a two-pronged growth strategy adopted under the advice of Bain & Company in late 2015:

Why does The Life You Can Save recommend Village Enterprise?

​We recommend Village Enterprise because ​​they received a high score on an “Impact Audit” conducted made by  ImpactMatters, one of the charity evaluators we have historically used to inform our recommendations. Impact Matters has subsequently been acquired by Charity Navigator and no longer uses the “Impact Audit” model.

All photos and videos courtesy of Village Enterprise