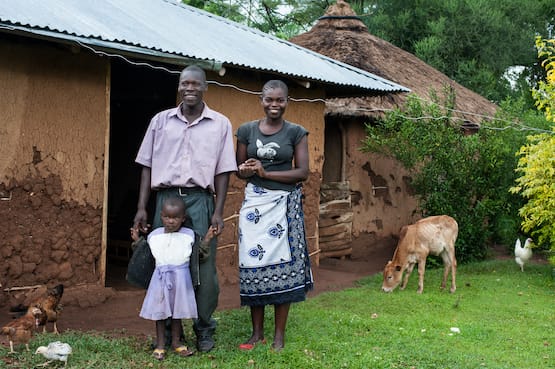 At the home of recipient Gabriel Otieno Awoche in Koga village on 22 October 2014. Gabriel built a house and chicken coop with the cash. He also bought woodworking tools for his furniture workshop. Gabriel with his wife Lucy Adhiambo and their daughter Charlotte, 3. They also have another daughter, Mariam, age 1 1/2.
< CHARITY STORIES

by GiveDirectly | 28 Apr 2016
GiveDirectly, Create economic opportunity
This year, GiveDirectly will begin paying everyone in multiple villages in East Africa a regular income that’s enough to meet their most basic needs, and keep doing so for more than ten years. But to launch the project, we need your help. If you do decide to donate to support this trial, at a minimum your money will help shift the life trajectories of thousands of low-income households. At best, it will change how the world thinks about ending poverty.

Basic income is an idea that’s been talked about for decades and is currently being hotly debated around the globe, but it’s never actually been fully tried and tested. So we’re going to do it and study it.

What is a basic income?

A basic income guarantee is a public policy that would provide all people a basic floor—an income that is enough to live on and that is provided irrespective of work simply because the recipient is a member of that community. It is provided to everyone, regardless of need, forever.

Since the time of Thomas More, people from across the political spectrum have expressed interest in the idea, from Dr. Martin Luther King Jr., to theconservative economists Milton Friedman and F. A. Hayek. Some argue this is the moral thing to do; others argue replacing a patchwork of existing government programs with a basic income is more efficient; technologists argue the coming robotization of the workforce makes it necessary. And it’s not just words; in countries where basic income is up for debate, trillions of dollars of social services are at stake.

What is the evidence?

The deep evidence base for unconditional cash transfers provides plenty of reasons to be intrigued by basic income. We know people who receive cash transfers don’t blow it on drinks or stop working but rather increase their earnings, their assets, and their psychological well-being.

But, we know less about basic income. We haven’t yet seen a rigorous evaluation of a program that is:

A number of studies provide helpful information, and there are some pilots coming online, but none so far has met all of these criteria.

What are we doing?

While we don’t have a position on the ultimate value of a basic income absent further evidence, as an organization that has worked extensively on cash transfers, we have an opportunity to help answer some of the big questions associated with basic income. Will people devote more time and capital to valuable enterprises like entrepreneurship or family care? Will basic income disincentivize work, create dependencies, or reduce overall productivity? With your help, we will run a long-term, universal basic income and study it rigorously to find out.

We think the whole thing will cost roughly $30M, of which around 90% of the funds will go directly to very poor households. Running the project in an emerging market, where meeting basic needs is far cheaper, will make it affordable to enroll enough people to generate statistically robust evidence. At the same time it will let us directly inform policy debates in those emerging markets, which are the front lines of the global fight against poverty.

To get started, we’re putting in $10 million of our own funds to match the first $10 million donated by others.

How can I participate?

Please consider joining us to fund and test a basic income. At a minimum our money will shift the life trajectories of thousands of low-income households. At best, it will change how the world thinks about ending poverty. We’ll provide updates on this page and continue to add more resources about basic income to those below.

You can also read about this exciting project in Slate article  about it, or visit our website to learn more or to contribute to the project.